This season’s bush fires in Australia are one of the country’s worst on record. The fires have burned through more than 12 million acres of land, and are estimated to have killed at least 480 million animals.

The fires are posing a significant threat to Australia’s ecosystems, which host a unique variety of species such as Kangaroos, Koalas and flightless birds which are native to Australia

It is thought that many of species may now face extinction as a result of the fires that have decimated the populations over the last several months. It is estimated that 30% New South Wales’ population of Koalas has been lost to the fires. This figure will only continue to rise as the fires continue to rage on. Heat has driven many animals including Kangaroos to flee, but not all can escape. Australia is known for its endemic flightless birds, which are unable to venture far from the ground. Koalas also face tough odds as they are naturally a slow moving species that live in highly flammable Eucalyptus trees.

Whilst substantial efforts are being made to rescue animals that have become trapped by the fires, animal care centres are struggling to help with the demand of surviving animals that need medical attention. Once it is deemed safe for the animals to be re-released into the wild, the next concern is where will they go? 12 million acres of land has been lost to the fires, which equates to a significant area of habitat loss. The surviving animals are likely to struggle to find food and shelter, as whole ecosystems and food chain systems have been disrupted. 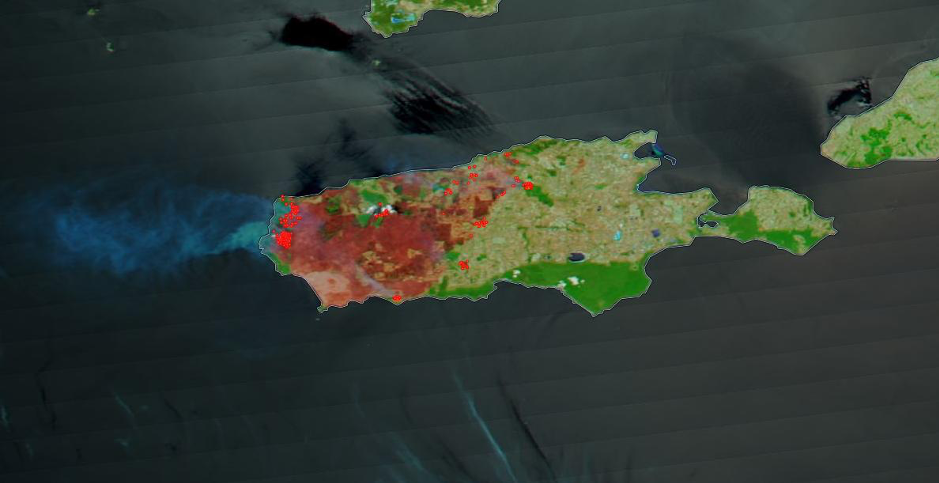 This image taken on 7th January 2020 by NASA satellites shows the extent of the fire damage on the island.

Kangaroo Island in particular is facing severe impacts from the fires, as ecologists have concerns about the loss of key feeding and breeding areas on the north coast of the island. The island is home to rare species which are under threat as for some species there are no considerable habitats left which can lead to local extinction events. The fires have come at the start of the breeding season when some females may be sitting on an egg and are more reluctant to fly away. The Glossy back cockatoo is a rare sub-species that is completely confined to the island and has lost critical habitat along the north coast which includes key nesting areas. However, hope is not lost as some glossy black cockatoos have been spotted flying along the roadsides.

How will the Australian bush recover?

Professor Woinarski says that recovery could take decades for the resources that the plants and animals need after the fire to come back again. For example, tree hollows and dense layers of vegetation that provide valuable habitats and provide the basis for whole ecosystems will take years to return to the landscape.

It is worth remembering that fires have been a part of the Australian landscape for thousands of years, and many species and ecosystems have evolved to cope. Some animals have adapted to find refuges in rock crevices or burrows. For example, during the 2009 bushfire season, the mountain bushtail possum survived by sheltering in tree hollows, and experienced less mortality from the fires than from the changes in water availability. However, the severity and size of this season’s fires may limit the effectiveness of strategies such as this.

Whilst the fires continue to rage on, it is difficult to build a complete picture of the wildfire impacts. However once the fires subside, scientists are dedicated to carrying out on-the-ground studies to understand the conservation measures needed to prevent the recent scenes from becoming the new normal.

The Crooked Forest, as it is known is a forest of around 400 pine trees in Poland. These are no normal Pine trees, as the base of each tree bends at 90 degrees before curving back upwards.

From Brickworks to Residential Development - The Transformation of Millennium Motors

Basic design elements of a building can improve its energy performance and user comfortability from the outset; at a lesser cost than installing active elements such as solar panels.